Fostering dialogue with the armed forces in humanitarian response: An interview with Rohan Kent 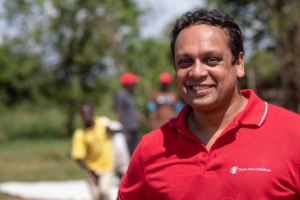 “The golden rule is to always find the right balance between a pragmatic and a principled response”, says Rohan Kent. Photo: Save The Children

Rohan Kent works within the Concepts and Capabilities Directorate of the Australian Civil-Military Centre, a government agency that promotes joint efforts between civil, police and military forces. Before joining the Centre, he spent 15 years working in the international aid sector across Africa, Asia, the Middle East and the Pacific. He served on Sphere’s Executive Committee as the Save The Children representative in 2018-2019.

In this interview, Rohan explains how creating strong relationships between the humanitarian and security sectors in a response operation can improve the quality of the assistance provided to affected communities, and why armed forces can greatly benefit from understanding and applying humanitarian standards in emergency situations.

You have been working as a disaster management practitioner for more than a decade. Do you remember the first time you came across the Sphere standards in your career?

I was in the Solomon Islands, responding to the damage caused by the 2007 earthquake and tsunami. It was my very first mission and I was trying to do my best, but I had limited experience and no formal training. I remember having a phone conversation with a colleague in London who was supporting me with technical advice and was asking how I would be measuring the application of humanitarian standards. I told her I had no idea what she was talking about. She was shocked. ‘Look, you’ve got to at least try and achieve these standards’, she told me off, ‘they have been set by humanitarians globally, and they’re like our bible’. That was my introduction to Sphere. Since then, I have always carried a copy of the Handbook around with me during missions.

A funny side story is that last year, in Mozambique, I finally ended up meeting that lady in person. She was a United Nations Humanitarian Coordinator. ‘You probably don’t remember how we met’, I told her, ‘but I’m now representing Save the Children in the Sphere board!’ It was great to be able to tell her in person how much of a positive influence she had had on my career.

The Sphere Handbook addresses civil-military coordination across its chapters. In your experience as a humanitarian practitioner, why is this issue so important?

First of all, let’s not forget that police forces also play a key role in maintaining security. Their intervention is not appropriate in all crisis situations but can be a powerful protection tool. That’s why we usually refer to this matter as “CIV-MIL-POL”.

At the core of CIV-MIL-POL coordination is relationship building. That involves information sharing, task division and planning. This type of coordination is extremely important because it allows to promote humanitarian principles among all actors involved (especially neutrality and impartiality). We need to ensure that assistance is delivered until no longer required or appropriate, and that it doesn’t create dependence on military assistance.

The fact that the Handbook addressed civil-military coordination is excellent because it reminds everybody about coordination and why it is so important.

The golden rule is to always find the right balance between a pragmatic and a principled response, so that coordination with the military does not compromise humanitarian imperatives

What are the particular resources, skills or expertise that a military force can bring to a response operation?

First of all, it is vital that all actors in crisis response – and not just civil society and the military – collaborate with one another. Coordination helps to promote dialogue, minimise inconsistency and duplication of efforts, and promote predictability and accountability.

The military can bring many resources, skills and expertise to a response operation. The first is protection: one of the key activities of military personnel in disaster zones is to improve security so humanitarian agencies can operate safely. For instance, when managing food distributions in Mozambique last year, we would always coordinate with the local police to ensure they knew about large gatherings of people. Police presence also helps control potentially dangerous situations. Secondly, armed forces usually have great expertise in handling transport and logistics and in mobilising staff quickly, for instance to start rebuilding key infrastructure or set up refugee camps.

The golden rule is to always find the right balance between a pragmatic and a principled response, so that coordination with the military does not compromise humanitarian imperatives.

What are, in your opinion, the major challenges faced by humanitarian agencies and the military as they share information, coordinate, or collaborate in response to a crisis?

Information is an important asset in any response, so a major challenge to collaboration is confidentiality. There is information that a government will not disclose – for instance, what kind of supplies they will receive, what locations officials will be visiting, and so on. At the same time, aid organisations have their own internal rules about sharing information, based on maintaining impartial and neutral access. Both these factors often make dialogue problematic.

Another issue is the lack of a shared ‘language’. Humanitarian workers may find it difficult to communicate with the military due to cultural barriers and differences in work methods. Both parties need to overcome stereotypes and bias in order to set common goals. In some response operations where multiple types of humanitarian actors work together, coordination can be challenging if one responder perceives the other with suspicion; for instance, when a donor government fears that supporting a humanitarian agency may actually result in funding rebel combatants.

Some of these challenges can be overcome by promoting dialogue. Parties should listen to each other and map the things they ‘agree to agree’, but also to what they ‘agree to disagree’. Avoiding a confrontational approach is really key to reaching an understanding.

In your experience, are military actors familiar with humanitarian standards? How are they useful and relevant to them?

Military actors will never fill the role of front-line humanitarian workers, nor do they intend to. Their mandate is different and is usually limited by a precise time frame for engagement. For this reason, not all military personnel are familiar with humanitarian standards. This said, many humanitarian actors are not necessarily familiar with them, either!

In my experience, however, I have found that there is a real willingness by armed forces to learn about humanitarian guidelines such as Sphere or the Core Humanitarian Standard once they become aware of them. I also realised that referring to a detailed guide like the Sphere Handbook when talking with military and police – who are used to structure and doctrine – helps presenting the humanitarian sector as coordinated and professional. Generally speaking, the standards do help mutual understanding and cooperation.

Do you remember any occasions when applying the Sphere standards really made a difference in facilitating collaboration with military or police forces?

I remember visiting a military camp in Indonesia in the late 2000’s. The camp had been built by the military in preparation to a pending natural disaster, to host the displaced people. At a first glance it seemed to be very accurately set up. However, as you walked around, gaps started to appear. The camp’s water sources were all located at one end of the camp, at quite a distance from most of the accommodations. The latrines for men, women, boys and girls were placed all together and even farther away from the shelters, in what looked like a ravine area. It would have been dangerous – especially for women or small children – to go to the bathroom in the middle of the night.

We sat down with the military commanders, standards at hand, to discuss these issues. We noted that splitting water sources would not only reduce the walking distance from the accommodations to the pumps, but also cut down the people’s waiting time. We also suggested to place the shared latrines closer to the shelters and at a ratio of one toilet per 20 persons, as recommended by one of the indicators in the Sphere Handbook.

What I think was key in this situation is that we didn’t accuse the military of not doing a good job, nor did we force them to do things in a certain way. Making reference to the Sphere Handbook gave us a strong argument and allowed us evaluate pros and cons together. It was a positive experience based on dialogue.

I feel that today there are also more opportunities to draw on the experience of military forces, the private sector, diaspora networks and other actors of the wider humanitarian circle. Power, exclusivity and sense of entitlement need to be forgotten

Sphere is currently developing its strategy for the next five years. Do you believe the Sphere community should work more closely with “non-traditional” response actors, beyond non-governmental organisations and national disaster management authorities?

Sphere has done a fantastic job over the past decades and I think it will continue being a cornerstone of the humanitarian action. As to the new strategy, I think there are two areas through which Sphere could further involve “non-traditional” response actors. One is the expansion of Sphere’s global community of purpose and practice to encourage local ownership and preparedness. The other is influencing policymakers, especially in governments, to include the standards in national and global humanitarian policies.

Humanitarian crises nowadays are increasingly transcending borders – COVID-19 is just one example of this. I feel that today there are also more opportunities to draw on the experience of military forces, the private sector, diaspora networks and other actors of the wider humanitarian circle. Power, exclusivity and sense of entitlement need to be forgotten and responders on all sides need to welcome each other to the coordination table.