A common vocabulary in a time of crisis: Working with the Sphere standards in the wake of Hurricane Dorian 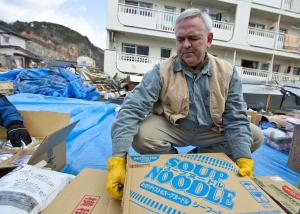 Sphere member Baptist Global Response (BGR) is working on the response, and also conducting Sphere workshops in the affected areas. Patrick Melancon, BGR’s Director of Disaster Response and Training, reports about his first-hand experience working with the Sphere standards in the aftermath of the crisis.

Hurricane Dorian brought devastating impacts to the Bahamas that vary from area to area. Because the country is a smattering of islands, some areas were protected from the wind and impending storm surge; others were not. The devastation was immense in Marsh Harbour, Abaco, which suffered a 23-foot storm surge. One of our assessors described it as a “ghost town,” with very few people in sight. There was no water or electricity on the island; hygiene items, cleaning supplies, and nappies were also much needed on Grand Bahama.

In the Bahamas, churches are seen as community network centres. A number of churches have been chosen as strategic centres for the distribution of work assignments, supplies, and community support. BGR is the lead coordinating agency between the Bahama Baptist Convention, one of the largest leading protestant groups on the islands, and the Southern Baptist Disaster Response Network, the third largest volunteer disaster response group in the United States. It specialises in meeting practical needs on the ground – from cooking to removing debris, supporting recovery, and meeting the psychosocial needs of the survivors of disasters.

Sphere gives us the same vocabulary, the same minimum standards, and an evaluative frame of reference that does not require debate or discussions when time is of the essence

All the members of our disaster assistance and rescue teams, as well as many Southern Baptist Disaster Response Network volunteers, are Sphere trained. When a disaster strikes and we need to do a rapid evaluation, Sphere forms the backbone of that assessment. Sphere gives us the same vocabulary, the same minimum standards, and an evaluative frame of reference that does not require debate or discussions when time is of the essence. Likewise, as BGR’s work crosses paths with other NGO initiatives, the common vocabulary and focus makes coordination and cooperation much less complicated.

All of our reporting of the assessment, for instance, was done using Sphere standards and with great assistance from the guidance notes. Our assessment team evaluated needs in terms of water, health, sanitation and hygiene (WASH), food, nutrition, shelter and psychosocial assistance. It was evident that livelihood support, food logistics, and healthcare would be issues in the short term; mental health will be an item to address over the next year or so.

All the members of our disaster assistance and rescue team are Sphere trained. When a disaster strikes and we need to do a rapid evaluation, Sphere forms the backbone of that assessment

After the assessment is done, we support humanitarian work in ways that will directly contribute to meeting a standard. Our initial work focuses on meeting life-saving needs: for instance, many of the homes will be repaired, so the initial steps for this are to remove mud and debris and to mould-proof the homes. Many shelters need to be refurbished and made fit for habitation and trauma counsellors will be deployed as needed. Working with the Bahama Baptist Convention, community centres will serve as axes of hope and healing.

BGR’s reputation is not necessarily of being the first to respond, but rather of being the last to leave. We expect this work will last for a couple of years. We will not leave until the work is done, and we have helped local communities to rebound from this crisis.