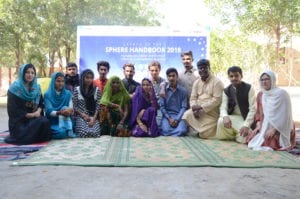 In the four months which followed the global launch of the fourth edition of the Sphere Handbook, this flagship publication has been introduced to the humanitarian community through multiple local events. By the end of March 2019, Sphere and its partners will have organised 27 launch events in 17 countries across 6 continents.

“It’s hard to imagine that there was a time when Sphere didn’t exist, when aid organisations weren’t held accountable to a common minimum standard”, said Brendan Cahill of Fordham University’s Institute of International Humanitarian Affairs, following the launch events in New York and Washington DC. “Twenty years later, the fourth edition is an indication of how important this is in humanitarian response”.

These launch events are an opportunity to introduce the new Handbook to the very people that made it possible through participation in the consultations or in the production of the various technical chapters. they also provide an opportunity to facilitate broader conversations about humanitarian action with local partners.

The Bangkok regional launch, for instance, saw the participation of some 150 attendees, representing the humanitarian community of over 30 countries. They discussed recent findings on the topic of quality and accountability to affected populations. The event was followed by a Training of Trainers focusing on the same matters.

In Germany, the launch event was organised in collaboration with Sphere’s German Focal Point and logistics company Deutsche Post DHL, which announced it will support Sphere in offering training to humanitarian actors in areas affected by crises. This was a significant moment for Sphere, as this is the first enduring collaboration with a private sector organisation.

The importance of using standards in context was also a strong focus of some events. Community World Service Asia (CWSA) partnered with a local theatre group in two villages of the Umerkot district (Pakistan). Interactive theatre performances were organised, where some 130 spectators were encouraged to share their own challenges with food distribution methods or direct cash delivery mechanisms. The community learnt about the Sphere standards and how to use them to make sure the assistance received is appropriate, timely, and of good quality.

Translations of the Sphere Handbook are also introduced to the Sphere community through such events. The Spanish edition was released through a series of events in Spain and in La Paz (Bolivia). “The first time I attended a Sphere training was in rural Mozambique in 2006, in Portuguese”, remembered during the event Daphne Sorensen, Country Director for Save the Children Bolivia. “Now we have a new Spanish version and many people in other countries can read the Handbook in their own language. It shows that Sphere is truly global”. More events are scheduled in 2019, particularly as translation work is in progress to several additional languages.

Before the end of March, the Sphere Handbook will be also launched in Australia, DRC, Bangladesh, Senegal, Kenya and Belgium. To remain updated, follow Sphere on social media and check the Sphere calendar on a regular basis. Organisations willing to organise a launch event are invited to contact communications@spherestandards.org.