2018 Handbook launch: past and future of humanitarian standards 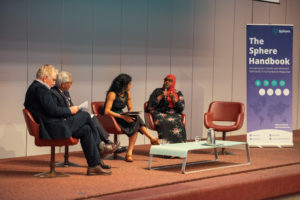 The event, held in Geneva on 6 November, saw the participation of an experienced group of panellists who shared their reflections on past and future challenges of the Sphere standards. Photo: Alexander Petrenko

“When we started it, we had a real hard time publishing the Handbook”, said Peter Walker, co-founder of the Sphere movement. “It now exists in more than 30 languages. The humanitarian community has taken it, run with it, and improved it over 20 years.”

As Sphere reached the milestone of its second decade of existence, the humanitarian community got together to celebrate the new edition of its flagship publication – the 2018 Sphere Handbook. The event, held in Geneva on 6 November, saw the participation of some 200 attendees, as well as of an experienced group of panellists who shared their reflections on past and future challenges of the Sphere standards.

The new Sphere Handbook – released on the very same day, in both online and print formats – comes as the result of the most far-reaching and inclusive consultation process in Sphere’s history. With some 4,500 online comments received and 60 consultation events held in 40 countries, the revision also became a time to reflect on humanitarian practice and build a stronger sense of commitment across the sector; it also brought together a true community of purpose. “We could focus on what we agree must be done to save lives and restore dignity”, commented Christine Knudsen, Sphere director. “We challenged ourselves with evidence and learning to move the bar forward for the people we serve.”

Over the course of the past 20 years, the Sphere standards have proved an indispensable tool to professionalise the sector and improve coordination mechanisms among its many actors. Started as a time-limited project in 1997, Sphere flourished from the many lessons learned during the Rwandan genocide and the Bosnian war, at a time when the humanitarian community was seeking ways improve the quality of the assistance provided. “Back then, it was arbitrary who showed up and what was delivered”, remembered James Darcy, a long-time humanitarian practitioner and Sphere supporter. “Sphere was an attempt to make humanitarian aid less arbitrary and to create a framework for accountability.” “The standards helped crystallise a coordination process that culminated with the creation of the humanitarian clusters in the 2000s”, he added.

In spite of this contribution, many practitioners see the road to true quality and accountability still scattered with major challenges. Agencies find it difficult to apply the Sphere standards in particularly sensitive contexts. The coordination with other humanitarian actors – particularly government agencies – is at times problematic. The lack of national legal frameworks promoting the application of humanitarian standards often results in hurdles for relief organisations.

“I like to call Sphere the ‘North star’ which guides us, but often in the field you see human flaws getting in the way – like a lack of access and resources”, explained Nasra Ismail, Deputy Director of the Somalia NGO Consortium. “In writing, in accountability to donors and proposals, the standards are referenced throughout; but there is often a break between application, implementation, and references”.

“In the last years, the IFRC has made a big investment into the International Disaster Response Law program”, continued Jagan Chapagain, IFRC Under Secretary General for Programmes and Operations. “One of the main purposes of this investment is trying to bring a legal framework into a country which includes humanitarian standards. Lots of times there is nothing a government can do to implement standards without an underlying legal framework”.

Yet, the Sphere standards remain an essential tool to aim for better humanitarian response. By creating a common language among different practitioners, they have strengthened collaboration and concerted actions in complex crisis situations. By providing concrete standards and indicators for all response actors to work together, they have encouraged a deeper understanding of local contexts and cultures.

“Do we meet standards everywhere? No”, Jagan Chapagain summarised the conversation. “But have we seen improvements in the past 20 years? Yes, certainly.”