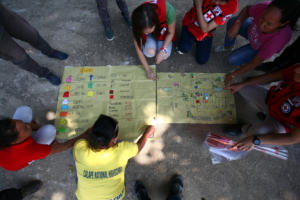 Sphere released a new resource that supports humanitarian practitioners implementing Disaster Risk Reduction (DRR) activities while keeping a standard-based approach in mind. This publication is the second of Sphere’s ‘thematic sheets’, a series of short guides that compile references to a particular topic in the Sphere Handbook and offer additional guidance in that area. The first thematic sheet, released in 2019, focused on reducing the environmental impact of humanitarian activities.

To better understand how people can be placed at the centre of DRR activities, Sphere talked to the three authors of the guide. Melanie Assauer is a coordinator for disaster management at World Vision Deutschland and has more than 15 years of experience in humanitarian contexts. Katrin von der Dellen is the Program Officer for South-East Asia at CARE Deutschland e.V.; before joining CARE in 2011, she worked in various DRR-related roles including at the German cooperation agency GIZ. Martin Kunstmann is the Programme Coordinator for Asia and the DRR Focal Point at German humanitarian agency Arbeiter-Samariter-Bund (ASB), where he has worked in various roles since 2005.

The Sphere Handbook does not explicitly mention Disaster Risk Reduction in its principles and standards, and mostly focuses on the disaster response phase. In your opinion, how is the Handbook still relevant when planning, implementing or evaluating DRR activities?

Katrin: Humanitarian response and DRR interventions share some common approaches. Sphere’s technical chapters provide guidance on areas that are relevant for DRR measures: for instance, the equipment of evacuation points with WASH facilities, cash interventions to diversify livelihoods, or building disaster-proof housing and infrastructure which reduces the impact of future disasters and contributes to improved resilience.

Melanie: Humanitarian workers are well used to the “build back better” approach, one of the pillars of the Sendai Framework for Disaster Risk Reduction. This approach is mainly known in the context of reconstruction, but it has a broader meaning and can be interpreted as “build better in the first place”: it can refer to training a community of health workers, setting up a cash assistance program, or establishing any other safety nets to support the population during the recovery phase. The Sphere Handbook sets standards and strong recommendations on how to apply this approach when setting up a DRR plan.

Is there a concept in Disaster Risk Reduction that humanitarian workers should consider more in their work?

Martin: The code of conduct for the International Red Cross and Red Crescent Movement and Non-governmental Organisations (NGOs) mentions that humanitarian response “must strive to reduce future vulnerabilities to disaster”. That’s why it is important to consider the longer-term impact of all humanitarian response programmes. The Sphere Handbook stresses the need to consider the context in which humanitarian programmes are implemented, but also to understand the vulnerabilities and capacities of the affected populations and to build on these local capacities. The Handbook also emphasises the “do no harm” principle. All these aspects are key to avoid future risks created by humanitarian responses, which can be reduced if training and awareness raising are integrated in the response programme.

Katrin: Natural disasters are increasing in frequency and intensity and many of them are worsened by climate change. In 2019, for instance, heavy precipitations, flooding and the rising of sea levels intensified the impact of cyclones Idai and Kenneth: this resulted in a serious humanitarian crisis that affected Zimbabwe, Mozambique and Malawi (almost 2.2 million people were considered in need in Mozambique alone). Many scientific studies indicate that the trend is leading us towards a greater number of climate-related disasters such as storms, floods, cold spells and heat waves. To determine the risks faced by a population, it is crucial to estimate its exposure and vulnerability to climate factors. some communities in developing countries are affected by “slow-onset” disasters (crises that emerge gradually over time, for instance as a result of droughts or desertification) and this makes them especially vulnerable.

Certain populations groups are disproportionately affected by disasters due to a wide range of barriers – physical but also social, cultural, economic and legal. How can humanitarian professionals make sure their DRR activities are truly inclusive?

Martin: The design of DRR measures starts with the identification of barriers and in this process, the engagement of the affected population is an absolute must. They are the true experts! Only the involvement of at-risk groups will reveal possible shortcomings and lead to improvements before the disaster strikes.

Have you ever witnessed a DRR activity that failed due to a lack of inclusion?

Melanie: I think that one the most significant examples of a failed DRR operation is the global response to the current COVID-19 pandemic. Nations around the world were unprepared to outbreaks and did not manage to put vulnerable or local perspectives at the centre of the response; some developing countries have been worse affected by the DDR measures set to ban the pandemic than by the pandemic itself. I wish governments had used more of a humanitarian approach and followed guidelines like the Sphere standards.

Martin: Very often, the language used when communicating to the communities is too technical and not accessible. When implementing a DRR activity, it is important that everyone can access potentially life-saving information. Before Typhoon Haiyan hit South East Asia in 2013, the local communities did not understand in full the extent of the threat: many households had already experienced typhoons and flooding before, and by far underestimated the impact that the storm surge could have in the case of Haiyan. If the early warning messages had mentioned a “tsunami-like” wave, perhaps the wording would not have been technically correct, but the communication might have saved lives.

Could you provide, on the other hand, an example of a DRR activity that really put the interest and wellbeing of the affected community at the centre?

Martin: My organisation, ASB, is supporting local organisations of people with disabilities who act as first responders in case of disasters. This support includes technical trainings, mentoring, and connecting them with local DRR structures. Once trained, these people are directly involved in rapid needs assessments and program implementation. This program had a very positive outcome: not only did the quality of the humanitarian response increase, but the perception of persons with disabilities also largely improved. They are now seen as a valuable resource for the community.

Melanie: I was once contacted by a consultancy company specialising in GPS mapping, who offered to provide maps for evacuation plans. They presented their services as tailored to local communities. The company shared very detailed satellite pictures and even calculated the shortest routes to evacuation areas. I asked if the satellite could also estimate the population’s cultural beliefs – whether the community thought that route was affected by witchcraft, whether armed forces posed frequent threats in those locations, whether there were mine fields or any obstacles for people in wheelchairs. We finally managed to develop evacuation plans in close collaboration with the communities, giving them access to GPS data and tracing routes that also considered socio-economic, physical and cultural barriers.

What will be the most pressing challenges the humanitarian world will face, with regard to Disaster Risk Reduction, in the next five to ten years?

Melanie: I assume we are going to increasingly face disasters of global impact. At the same time, risk prevention should remain local and as context specific as possible. Responses should keep people and communities at the centre and focus on their integration, ownership and self-determination. There are global challenges, but no global answers.

If you had to pick a fundamental message from the new thematic sheet that humanitarian and disaster management professionals should keep in mind, what would it be?

Melanie: Disaster risk reduction is the first step of a humanitarian response. Preventive work done according to Sphere standards before a possible crisis will mean a more appropriate response during a crisis.

Martin: It is usually the affected population itself that acts as first responder in the event of a disaster. This means that humanitarian and DRR practitioners should strengthen the local capacity to prepare for and respond to disasters and involve the population, in particular at-risk groups such as older persons or persons with disabilities, in the planning and implementation of all programmes.